« Back to BLOG: An Enterprising Life « Older Entry | Newer Entry »

The smile tells it all. When you see a child smile, you know it's genuine. They can't help it, nor hide it! My son is the same way. He attempts to trick me, but if we are face-to-face he gives it away with a smirk. Sometimes he turns his head, as to not give it away, but his cheeks poke put from the back indicating a smile and it doesn't work. Is this about smiles? Well, yes and no.

At my son's school they have been allowing them to dress-up this week in different costumes. Each day had a theme and today was Sci-Fi. If you know anything about my son it is his love for everything Sci-Fi, especiall Star Wars. In preparation for today, I asked him to draw what he wanted on Wednesday because it was all about copying what he had already seen or buying a mask and passing himself off as a character that has been seen before. This all came about because I believe that a parent can take a few different paths when it comes to rearing children. Mine isn't necessarily what other might do, but I do what I think will push him beyond the norm. I was not willing to pay for a mask of, as I put it to him, Boba Fett, Jenga Fett or any of the folks in the Fett family, a Star Trek or Darth Vader replica that he was not going to be able to fit (nor will use again) in a matter of weeks. It just didn't make sense to me. Then, there is my choice to challenge him wanting to be one of the crowd. See he could go to school and be one of the many who has on a Darth Vader mask or something related to a character everyone knows or step outside of his comfort zone.

What I chose to do was tell him that I knew he had characters he create. He draws in notebooks on scraps of paper, and anywhere he can - all are characters with their own personalities, clothes, and personas. "See, all George Luca id with Star Wars was take characters from his head and make them come alive! That's what Star Wars is son," is what I told him. "And I challenge you to trust that your characters can come alive too. Make them come alive just like you've seen on Star Wars and Star Trek," I said. In that moment, I understood that he was stuck in that he thought had to be a costume, did not see that his ideas were valid, and resisted the opportunity to make them come alive until I asked him to draw them and consider himself the right person to make them come alive. He was silent, but toldme he uderstood what I was saying.

He got home, stayed up 45 minutes late and showed me his rendering. Not sure what to make of it, I said, "good, we'll discuss this further in the morning", off to bed he went. Yesterday morning, we discussed if he needed to go to the fabric store after school, and he did, so I picked him up to do so. Upon arriving at the fabric store he began sharing his vision, which was muddled to me, and I sat in the parking lot with him until he worked through the frustration of drawing it the way I could understand. When that moment arrived, it was like hearing harmony in a choir! We looked at each other, he smiled, and I said, "now I get it, I can work with that, let's go!" He picked out everything about the costume fromthe color of the fabric to the button details and thread used to sew them on. I just let him have his way with it because it's his character coming to life. I spend 3.5+ hours getting this cape just right. And the time with him and making his vision come true was immeasureable.

There are a few things I've learned from this costume project that I want to share:

1) Children Need to Be Pushed: If I had taken the easy way out bu purchasing an off-the-rack costume he would not have considered his ideas as valid. Pushing him to go outside of what he insisted he needed forced his creative hand to move. I was not settling for a run of the mill Vader costume because I've seen it too many times. If we let our children shrink form their ideas and talents they begin to blend in with the crowd.

2) Less Me More Him: I can be overbearing, pushy, controlling, and, frankly, unrelenting at times. As parents we sometimes take our children's ideas and make them our project, as if we are getting graded on them. The result is that there is more of us int heir projects than there is of them. Letting him take control did not mean that he set budget, was no questioned, or there was no discussion about things. What it meant was it's his and he should own the choices that are critical. He chose the fabric. Yes, I looked through the bins to find different ones in his color scheme to give him choice, ultimately he chose the fabric. He chose the buttons. Yes, I showed him where the aisle was for the buttons, but he chose the ones we bought. He drew the cape. Yes, it took come collaboration to make it since I don't own a sewing machine, had Stitch Witchery, bought a set of sewing needles, and grabbed a spool of thread. However, the changes made were all approved by him, within his vision, and even exceeded his expectations (and mine!). The more I stepped back the greater his influence and confidence became.


3) It Ain't Easy: He has a tendency to "leave things to Mom" which I don't do well. I think he figured he'd come home, do homework, and chill 'til bedtime, then, in the morning a delightful present would be waiting for him. Wrong answer. To have the things he wanted to he had to be a part of it, actively participating, staying up, workign through frustration, and seeing it through till the end. For an adult it's sometimes a challenge, for a 12 year-old it ain't easy. What I shred was that if he wanted it done he had to take everything that goes with it, and the final product would be worth it, but it wasn't going to be easy.


Needless to say, he loves his cape, wore it to school today with all black, and he added some black glove to the mix. We'll see how this all looks when he gets home! But, until then, here is all is for your viewing pleasure. 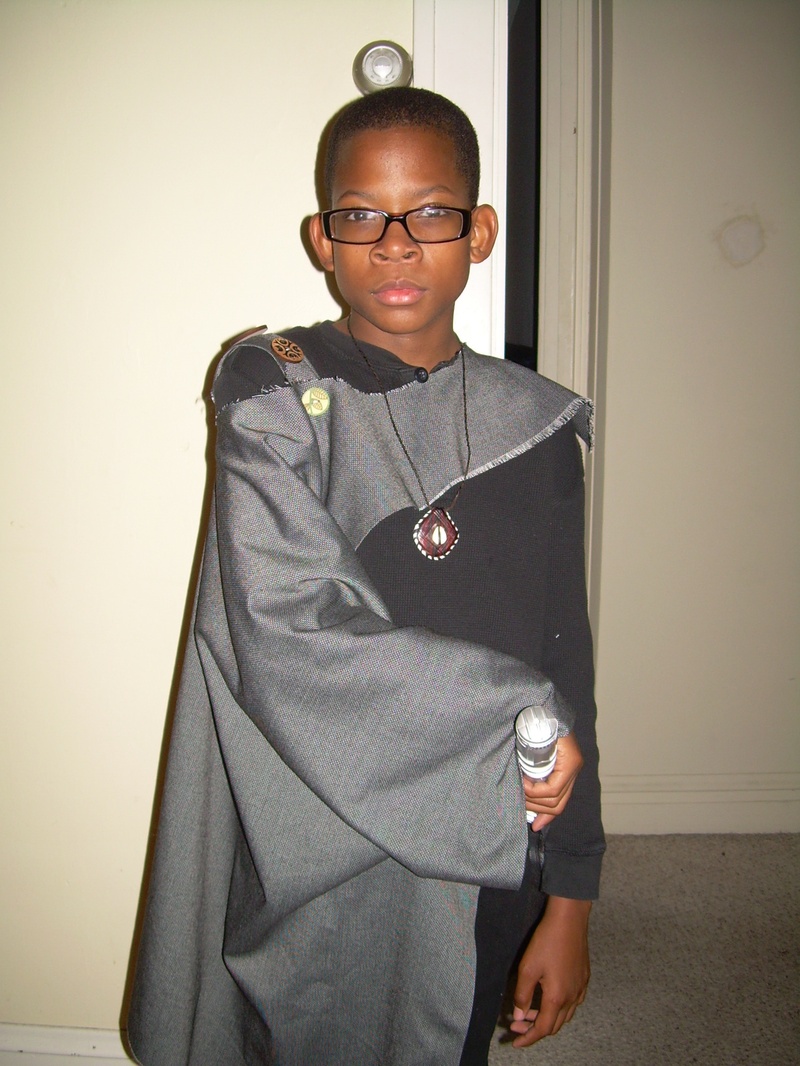 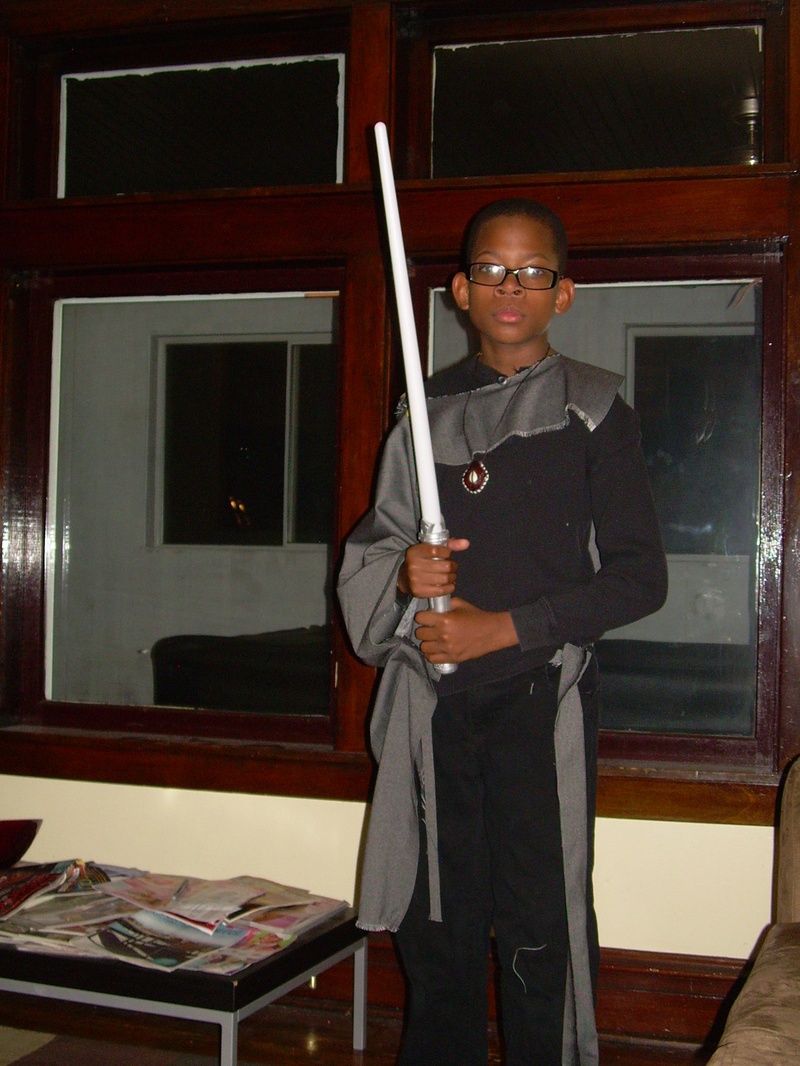 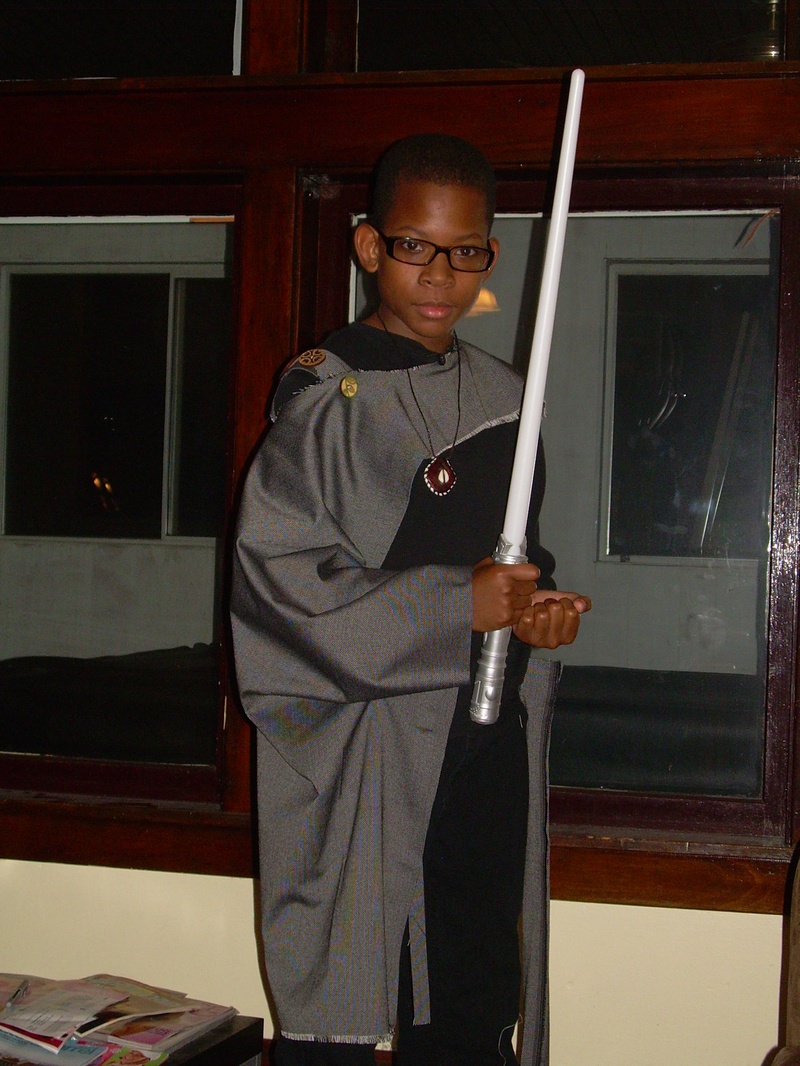 Oops, you forgot something.

The words you entered did not match the given text. Please try again.

Â©2012 Sidney Gaskins and Enterprising Life, LLC. All Rights Reserved. Sidney Gaskins respects your privacy. Your information will not be shared with any third party. Period.

Start a Free Blog at Webs.com